Bert William Bilsborough was one of this industries foremost pioneers. In 1952, Bert left his employer to be involved in the design and manufacture of Canvas and PVC products. Six years later, B W Bilsborough & Sons Pty Ltd was incorporated. As the time passed, Bert became heavily involved in making circus tents for such companies as Worth, Aston's, Perry's and many others. This became the forerunner to his passion for large structures, which initially, were made from Australian canvas. 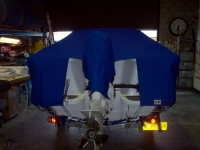 With the introduction of synthetic fabric, Bert recognised an untapped potential, even though the early fabrics were of very poor quality. His perseverance with ongoing research, which almost cost him his business, became the cornerstone of his reputation. Universities, architects and engineers all sought his council and with it grew a highly specialised but significant industry sector.

Of the many structures B W Bilsborough & Sons built, and the best known would be the very large portable stage for the N.S.W. Government, which is erected each year in the Domain in Sydney. His vast knowledge was partly encapsulated in those volumes known as 'the art of fabricating'. In 1978, during this period of growth, Bert's son Ian joined him. Ian subsequently took over the business when Bert decided to call it a day. 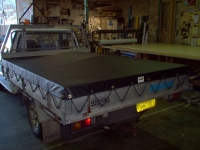 The business continued to thrive with the demand for inflatable products ever increasing. In 1998, Ian's son Craig would join the business. Together they provided a huge range of fabrications and repair services to the commercial and domestic market throughout Australia.

In 2011, Craig took over the business. Subsequently, in 2013, Craig relocated the business to South Western Sydney in the MacArthur area. Hence the name MacArthur Canvas & PVC was incorporated into BWB. 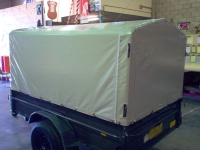 These days, some 70 years on, and now concentrating more on smaller jobs rather than the large inflatables from previous years, BWB / Big Dog Custom Covers continue to supply regular customers in Sydney and new customers in the Southern Tablelands.

With an aim to please better than the rest, our customers say we do just that.